Troy Allaway is the Director of Bands at Priceville High School and is in his 23rd year of teaching.  In its short history the Priceville Band has earned numerous superior scores and performed in local, state, and national events.

Mr. Allaway was the trumpet section leader and soloist with the Tenn. Tech. Marching Band, Symphonic Band, and Wind Ensemble. He played lead trumpet for the “Troubadours”, the university’s premier jazz ensemble.  He is an alumnus of the multiple time DCI champion Cavaliers Drum and Bugle Corps from Rosemont, Illinois.  He currently performs with the orchestra of First Baptist Church Decatur, AL, The Brass Band of Huntsville, and Redstone Brass Choir.  He resides in Trinity, Alabama with his wife Vickie. 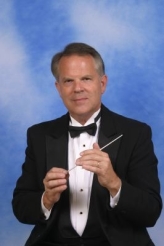 W. David Spencer taught high school band for 37 years, 34 in Alabama, serving as director of bands at Huntsville High School from 1980 until his retirement in June, 2014.  He received the B.S. degree from Auburn University, the M.M. degree from the University of Southern Mississippi, and the Ph.D. degree from the University of North Texas.  Spencer was a conducting student of Joe Barry Mullins, Sergei Zenacher, and Roger Winslow, and a trumpet student of Norbert Carnovale, Alan Cox, Leonard Candelaria, and Keith Johnson.  He has participated in conducting workshops with Frank Battisti, Hal Gibson, James Nielson, James Croft, Harry Begian, and Eugene Corporan.  Dr. Spencer has taught brass and jazz band at William Carey College and the University of Alabama in Huntsville, and has performed with the Huntsville Symphony Orchestra for thirty four years, ten as principal trumpet.  In 2011, Dr. Spencer was appointed artistic director and principal conductor of the Brass Band of Huntsville.  He is also founder and conductor of the Twickenham Winds, an adult community band in Huntsville and adjunct professor of graduate conducting and brass methods at Alabama A&M University.  Dr. Spencer is an inductee of Phi Beta Mu and Pi Kappa Lambda music fraternities, and holds membership in NAofME, ABA, NEA, AEA, and NBA.  He has received the NBA Citation of Excellence on six occasions. Spencer has served three times as chairman of Alabama Bandmasters Association District One and also as a member of the ABA Music Selection Committee.